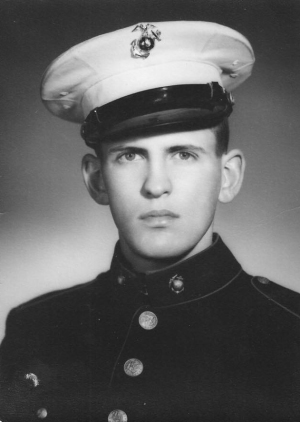 Darrell D. “Pete” Frame, 83, finished his race in the comfort of his home on Monday, February 17.
Pete was born on September 15, 1936 in Webster Township to Denver and Esther Duke Frame. He was a 1954 graduate of Webster High School. He joined the Indiana National Guard but soon transferred to the US Marine Corps, where he served honorably for three years and six months before his discharge at the rank of Sergeant. It was shortly after his Marine Corps service that he met Melanie “Pat” Boyd. They were married on May 6, 1958 and were blessed with one daughter and two sons.
Pete earned his Masters of Education from Ball State University. His 21-year career teaching Industrial Arts began at Knightstown. He soon accepted a position that divided his instructional time between Williamsburg High School, Whitewater High School and Fountain City High School. When the Northeastern Wayne School Corporation constructed their new building in the 1960s, Pete designed the Industrial Arts Department facilities down to the last fixture. He left the classroom in 1982 but not before inspiring many of his students to pursue careers in architecture and engineering. Pete retired for good in 2001 as Production Manager for Saver Systems. After retiring, Pete and Pat split their time between their Indiana and Idaho families.  He had a passion for his grandchildren, teaching, farming and gardening, all of which tied into the many memories he and Pat enjoyed making together and reliving often.

To send flowers to the family or plant a tree in memory of Darrell "Pete" Frame, please visit our floral store.