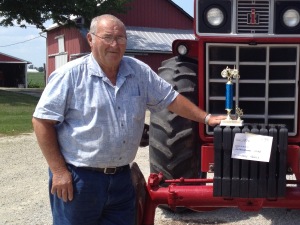 Larry Gene “Bear” Harris, 82, of Williamsburg, passed away peacefully at home on Friday, October 25. Larry was born on March 11, 1937, the son of Harlan Eugene and Margaret Bane Harris. He attended school in Greens Fork before graduating with the Economy High School Class of 1955.

Larry married the former Jewel Stanley on March 18, 1955. They were blessed with two daughters and 54 years of marriage until her death on January 19, 2010.   He later married Aileen Hamilton Wickett on March 12, 2011.

Larry farmed all of his life, literally to his dying day. He was partial to red tractors and was known for his quality restorations of vintage machinery with his grandson, P.J. Larry was a member of the Randolph County Tractor Club and the Wayne County Tractor Club. Larry enjoyed spending time with his family and was a fan of the Indiana Pacers and NASCAR.

Visitation for Larry will be from 4-7 pm on Tuesday, October 29 at the Smith & McQuiston Funeral Home, 321 US 27 South, Fountain City. Funeral services will be at 11:00 am on Wednesday, October 30 at the funeral home. Interment will follow in Greens Fork South Cemetery in Greens Fork.

To send flowers to the family or plant a tree in memory of Larry Harris, please visit our floral store.